The first TeX Live 2010 version has been released in the middle of September. I pushed this new version on Frugalware current some days ago.

The main changes are the use by default of PDF 1.5, which improve a bit the compression (My (few) tests show a decrease of 8 to 9% of the files’ size) and the new command epstopdf which give the ability to convert eps files to pdf directly (MetaPost fans like me will like that new command).

Some new packages also made their appearance in this version. I’ll present only one : pst-knot.

It allows to draw some classical (mathematical) knots very easily, for exemple the trefoil knot :

(Remember that the command pdflatex doesn’t support pspicture : use latex command instead).

Knots are classified according to number of crossings.
The first parameter of the psKnot function give the coordinates of the origin and the second parameter the type of the knot (here it’s the first knot with 3 crossings).

and then the result : 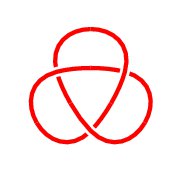 Documentation for this package is available here.